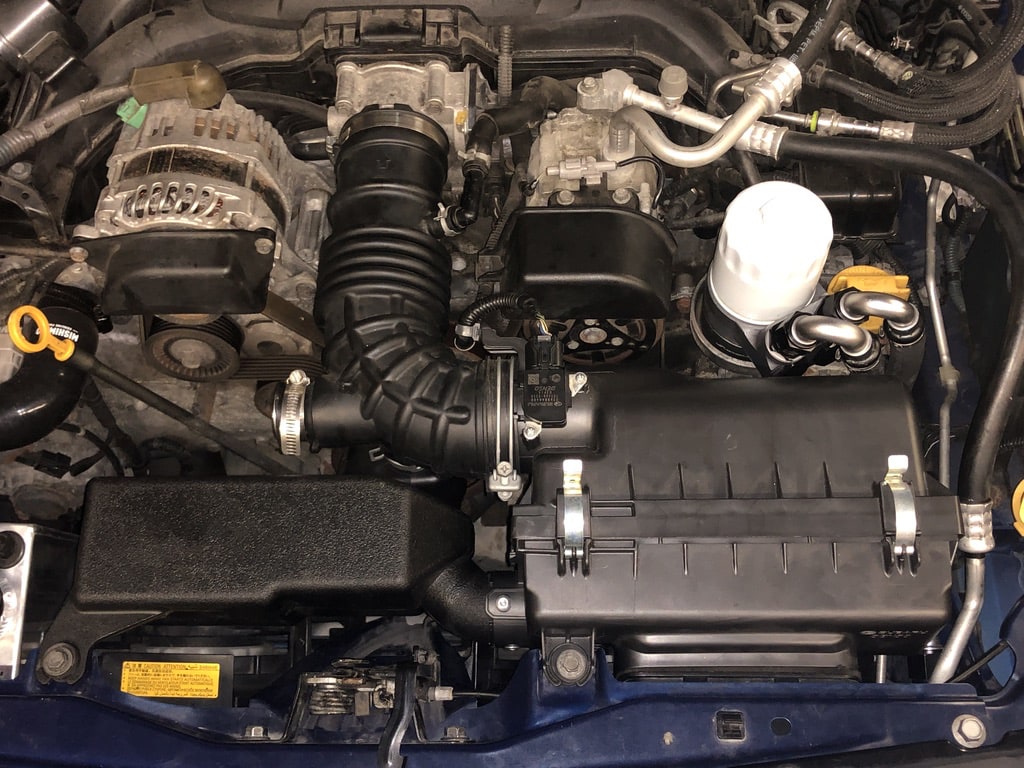 The clutch needed bleeding anyway as the fluid looked horrible, so from the “while I am in there” department, I figured I’ll also replace the bleed nipple with a Speed Bleeder and the rubber hose with a braided one. More important however were the Verus fuel starvation door and the MTEC clutch spring, with the fuel starvation door/flap being the most important item.

To install the fuel door I needed to pull out the in-tank fuel pump assembly, which hides under the rear seat. Fortunately the rear seat was still out of the car so after a bit of pulling, levering and getting a sticky gooey mess all over my arms, I managed to get to the fuel pump assembly and get the whole basket out. Pretty easy once I convinced the locking ring to loosen up a little.

Yeah, that out of focus little black flap at the bottom of the basket is where the fuel door goes. Make sure that you put the side with the O-ring against the assembly.

Assembly was mostly the reverse of disassembly. One thing I noticed was that there were traces of rust under the lid over the fuel pump, and it also looks like the black goo is losing a bit of its stickiness. I’m actually thinking that the discolouration at the bottom of the seat cushion was rust, caused by water seeping in via this lid. Probably have to reseal it.

This was the most important job done to avoid fuel starvation in long left hand corners. Next job was bleeding the clutch, which wasn’t helped by the fact that I trusted the Internet with sizing the Speed Bleeder and the internet was wrong. So I quickly vacuum bled the clutch and postponed fitting the new line and bleed nipple.

Last job on the list was fitting the clutch spring. These cars have a helper spring to make the clutch action lighter, which is nice but a lot of people including myself feel that the clutch is too light and doesn’t have a lot of feel. MTEC has a weaker clutch spring - the black one on the left of the picture.

Installation was about as annoying as expected, upside down in the footwell. Bad case of “I’m getting too old for this stuff”, but I got the new spring in eventually. The clutch feel definitely improved, but I’m not sure yet if it’s worth the hassle or not. We’ll see.

I also ended up having to fit a bonus item. When I bought the car, I noticed that one of the mounting lugs of the OEM airbox was damaged, and between having to grind away some material from the mounting lug under the airbox (had a co-spatial event with the oil cooler lines), I managed to damage a second mounting lug. Fortunately someone on ft86club locally to me was selling the whole airbox assembly in good condition for reasonably cheap. So a quick job to replace just the damaged part that actually bolts to the car, right?

Well, that’s when I found out that the airbox assembly for the mid-cycle refresh model is actually different from the earlier models and also requires a different filter. Fortunately this one came with a filter in decent nick, but as a result I ended up having to change out the whole assembly including the elbow. Fortunately this airbox clears the oil cooler lines without a visit from Mr Dremel.

Right now it’s time to put the track wheels back on and get ready for a weekend at Summit Point.

« BMW R1200GS Adventure - Taking care of a recall and some more work Subaru BRZ - first trackday, unfortunately not as successful as I had hoped »