Subaru BRZ - back from the bodyshop, now the real work starts 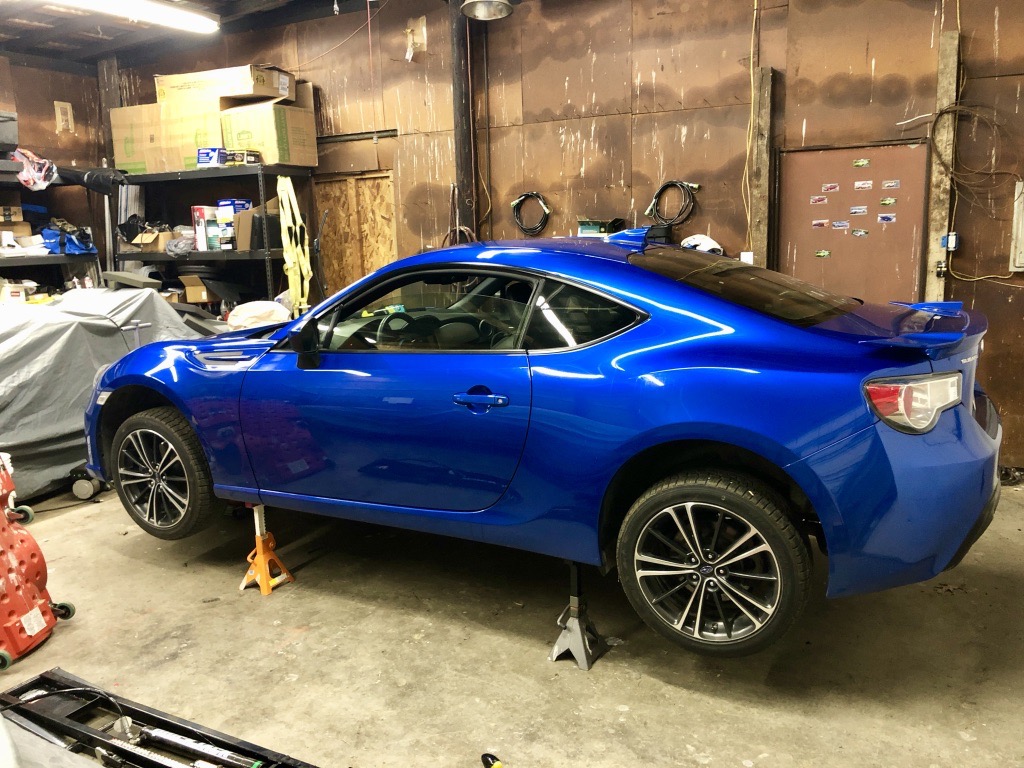 Picked up the car from the bodyshop a few days ago and am very happy with the results. Apparently it only took one pull to straighten out the damage, and even the shallow dent in the wheelarch mostly popped out. Colour match on the bumper is good as well, and they even repaired the damaged vent using plastic welding.

Poked around the car today after it had warmed up enough that there wasn’t much danger of me turning into a popsicle in the garage.

First annoyance is that the jacking points are slightly too far apart to work with my QuickJack. The front jacking points are also pretty mangled, looks like someone wasn’t too careful jacking this car up a few times. That’s a tad annoying because I may have to work out how to get it on jackstands without doing additional damage to those areas.

Other than that, it looks like all four brake calipers are dragging, with one of the fronts being the worst culprit. Given how that worked out with the S2000 when I thought I had freed up the pistons properly and almost cooked the brakes on the first track outing, I’m not going to chance it this time. Which of course means either rebuilding the calipers or finding rebuilt ones. That was a tad unexpected and does unpleasant things to the schedule. The brake rotors actually aren’t in that bad a shape, but the issues with the calipers appear to have contributed to uneven pad pressure issues, and the closer you get to the edge of the rotors you go on the rotors, the more corrosion is remaining. So they’re also good for recycling.

I also discovered that the coolant was a tad low and the expansion tank was dry (someone cough apparently mistook the deposits in the bottom for actual coolant) so I topped that up. Fortunately it looked like the coolant didn’t need bleeding, but I get to do that anyway when I swap out the radiator.

Rest of the day was spend trying to clean up the interior a bit more and scraping aftermarket sound deadening out of the trunk. Yuck. Oh, and one of the rear shocks makes rude noises even when I try to push the suspension up by hand, so I’m guessing that fitting the new used struts just climbed up the to do list.

I’ve got a few more hours of scraping to do and need to spend some time cleaning the interior. It’s not that it’s massively dirty, but it’s smells wonderfully like air freshener (gack) and given that I pulled out old pasta (used) from under the drivers seat I think I’ll better pull the seats for a more thorough cleaning. Not too fond of the fact that the seat bolts appears to be external Torx, but I think I have the correct socket for them.

I eventually got it onto the jack stands, which will do for now and had a bit of a poke around underneath, so far it looks OK with the usual surface rust on the subframes and all that, thanks to it being a PA car. Hey, at least no holes…

Other than that a quick inspection underneath it suggests that I need to replace some of the missing aero panels under the car and possibly replace the OEM exhaust. It doesn’t have rust holes yet but it’s not in that great a shape.

At this point I started pulling off the brake calipers and was greeted by this awesome sight:

Right, I guess I’ll skip rebuilding this brake caliper and just pay for someone else’s rebuilt caliper instead. Not to mention that this is the “good” side, I haven’t even pulled off the calipers on the passenger side yet.

Rebuilt calipers for all four corners are ordered, but of course Ye Olde Parts Shoppe’s delivery estimate of “Get it tomorrow if you order within the next X hours” magically turned into “yeh, we can probably get them to you sometime Saturday” for yesterday’s order. Oh well, the calipers seem to be a little bit in short supply so it was either RockAuto or this particular large chain.

I also tried to replace one of the rear shocks and pulled out the wheelwell liner to get a bit more clearance in a misguided attempt to avoid disconnecting the lower control arm (spoiler: didn’t work out). And what do I find behind it but rust. It’s surface rust and minor by local standard as there is a distinct lack of daylight shining through, but yet another thing to address, especially as it’s in a place that you can’t see unless you pull said wheelwell liners. Looks like at the very minimum I have to remove the bubbly paint, chuck some rust converter on it and paint over it. More delays.

I’m hoping I’m not finding more crunchiness on the passenger side.

Speaking of rust, if this car turns into more of a keeper than a quick build, I’ll also have to pull off the subframes and derust and repaint those. It’s all surface rust and I’d like to catch it before it goes past the “no big deal” stage.