I bought a Maxton Rollerskate 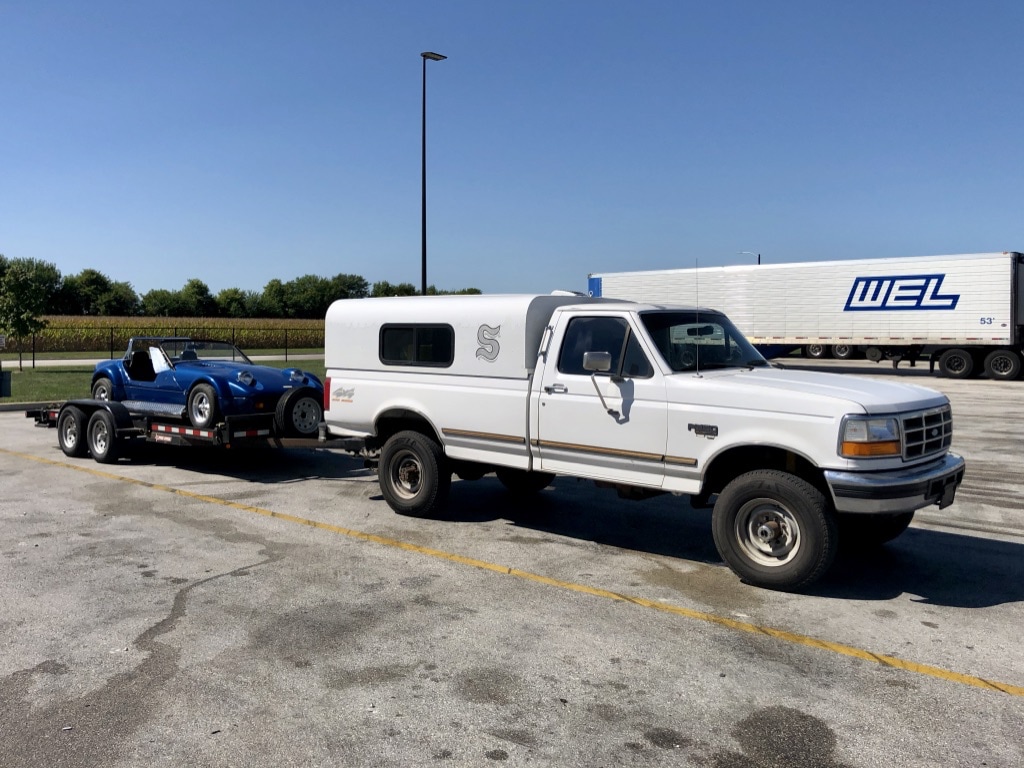 I spent a few days before Labor day weekend bouncing almost halfway across the country - well, at least to the other side of the Mississippi River - and back with this “the 90s want their tow rig back” outfit.

Yes, obviously this photo was taken on the way back, I didn’t think there would be much interest in a photo of the empty tow rig. I also got lucky with the weather - going out, it was tipping down between here and about Columbus OH, but bone dry on the way back so I didn’t have to put any tents, err, roofs up on the Maxton.

In essence, I did a Tyler Hoover and bought the cheapest Maxton Rollerskate for sale in the US. Well, it was also the only one, so that also makes it the most expensive at that time. So what the heck i a Maxton Rollerskate? Well, it is clearly inspired by Caterham/Lotus/Westfield type cars, but it’s also been fully engineered in the US (well, other than the drivetrain, that is).

Anyway, what did I end up buying?

Well, a 28 year old almost kit car that’s not been driven much. I bought it from the long term owner (since ‘96) who had bought it from what we believe is the original owner. It’s had very sparing use during the time and was only driven to the odd car show. Actual mileage is unknown as the speedo cable is seized and ate the plastic drive gear at the gearbox end. Based on the PO’s estimates, it probably has about 3-4000 miles on it.

The paperwork suggests that it actually has a 12A from 1976, which would make it an RX3 12A, I suspect. Not sure if it has the gearbox and rear axle from that car as well.

As we all know, vehicles that don’t get driven get sad, and this one is no exception. A quick test driver before I handed over the cash showed a few issues:

Anyway, it wasn’t like I would be able to find another one at the dealer down the road, plus it was the cheapest one I’ve seen in a while so on the trailer it went.

Getting it ready for registration

I already had an appointment at the DMV to register the car, which I fortunately can do before I need to get it inspected. Put the plate from the 911 on it and got the 911 an Antique plate in the process. That still allows me to drive 911 from Friday mid-day to Monday mid-day and on public holidays, but without the need for an annual inspection.

Anyway, back to the Maxton. First order of the day was to make Monsieur Klaxon (yes, it’s got a French horn) toot again. After I finally found the horn (hidden below the coolant expansion tank) and took it off, there was a nice layer of corrosion between the body of the horn itself and the ground connector:

Cleaned that off with some Deoxit, but still the best I could get out of the horn was a ‘plop’, yet it worked when hooked up directly to the battery. A check with the multimeter suggested that while I had all the volts at the horn contacts, I also had none of the amps. These cars are bit notorious for having bad grounds between the steering column and the body of the car, and they run the full current for the horn through the button and column. Yes, I already have a relay sitting in the pile of spares…

Pulled the steering wheel and horn button off to measure a tad more but with not much success.

Yep, that’s a “sliding ground connection” that looks like the assembly crew put it there. Only that it wasn’t bent right and didn’t touch the column. Some bending later and we have workign ground again:

With that done and a side mirror suction cupped to the car, off I went to get it inspected. The only problem the local garage found were inoperative brake lights, but fortunately those were just a bad contact at the pressure switch. Unplugging and re-plugging them produced working brakelights and an inspection sticker. Still need to go over those contacts with Deoxit also, but at least the car is now legal.

I also tried to bleed the suspected air out of the clutch, but it ended up feeling like either the master cylinder is bad (slow to come back) or the clutch hose is acting as a partial one-way valve. A quick chat with the PO (who still follows the saga along) points at the hose as the more likely suspect. He had the slave cylinder replaced recently and the mechanic apparently mumbled something about seeing rubber bits floating out of the bleed screw when he bled them. I’m just hoping that this is a stock Mazda hose…

The master cylinders are all Girling - the car has a full Neal race car pedal setup with dual master cylinders for the brakes with a balance bar, and a single master for the clutch. Looks like rebuild kits are still available, plus some of the other Maxton owners have successfully replaced them with compact Wilwood cylinders.

Either way, the clutch worked a lot better after my attempts at bleeding it. The gearbox is still not very cooperative, but I suspect that this may have something to do with the fluid in there being at least 28 years old.

Last night I put it up on the QuickJack (carefully) and tried to pull the wheels off it. That was a saga in itself that may or may not show up on a YouTube video and included the QuickJack flattening itself so far that one side wouldn’t come up again. Yes, it was operator error and I fixed it by lifting the front of the car with a jack. Wheels eventually came off so I could inspect the brakes. They all look pretty good, I suspect that the front brake spindles and wheel bearings (Mustang II) would benefit from a regrease, but they look good otherwise. The rear drums are the older non-self adjusting kind so I carefully pulled them off, dribbled some brake cleaner on them to clean up the dust without blowing it all over the shop and set to adjusting them. Both sides needed a click, and adjusting the parking brake cables produced what feels like a working parking brake.

Poking around underneath it suggests that it’s all pretty clean, but there is an oil leak either from the gearbox or the engine. I need to clean up the gearbox and check if I can see where it’s coming from. I have to change the gearbox oil anyway, so that’s not a big deal.

« Not much time to work on the S2000, so I made a video instead Didn't need another project, so I bought a hipster Honda CB400 Four »