Recovering the dashboard ended up being delayed, we’ll get to that shortly as I actually started doing that today.

First, time to catch up. I fitted the suspension last weekend. Not much to write about that, it’s all pretty well documented.

I clearly still haven’t eaten enough donuts yet as I wasn’t able to push down the rear suspension enough to insert the newly assembled Konis. The fact that they did need more clearance at the top didn’t help - the top suspension bushing was pretty badly collapsed as one would expect for stock suspension from 1989.

I ended up doing what I did on my last Miata - unbolt the upper arm at the knuckle, slot in the strut, lift the lower arm with a jack and slide the bolt back in. Fronts went in without a hitch as I had to remove the sway bar anyway so I could put the FM on in. We have FM suspension: 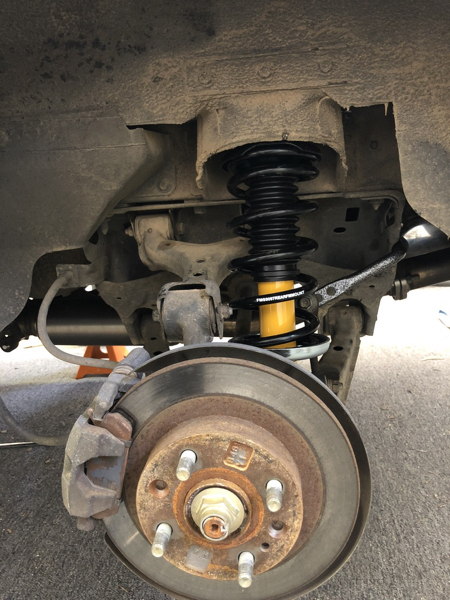 Unfortunately, while I had the undertray off I also noticed that the front main seal appears to be leaking quite a bit. That’s annoying as the timing belt had been replaced about 6k miles ago so it would have been a lot easier to replace the seal at that time. There’s also fair amount of oil over the back of the engine, but I haven’t figured out where that came from. I’m hoping it’s not both seals because if I have to either pull the motor or the transmission to address the leaks, I can pretty much guarantee that it won’t be a 1.6 that’s going back in.

Anyway, after tightening the suspension with the car on all four wheels again, I drove it to pick up some dinner. First impressions - other than “this needs a foamectomy, badly” - were pretty good. There are some rattles over rough-ish surfaces but I suspect they’re coming from the dash and not the suspension. The suspension does feel good, let’s see what it feels like have I put a few miles on it. And an alignment - it was out before I swapped out the suspension and oddly enough putting the new suspension on didn’t fix the alignment .

Oh, and when I came back from getting dinner, I noticed a somewhat odd noise I hadn’t noticed before. Sounds like it’s coming from the front of the engine and it awfully sounds like it’s the waterpump. I’ll try to record a short video when I have it running next.