Registered, and the work begins 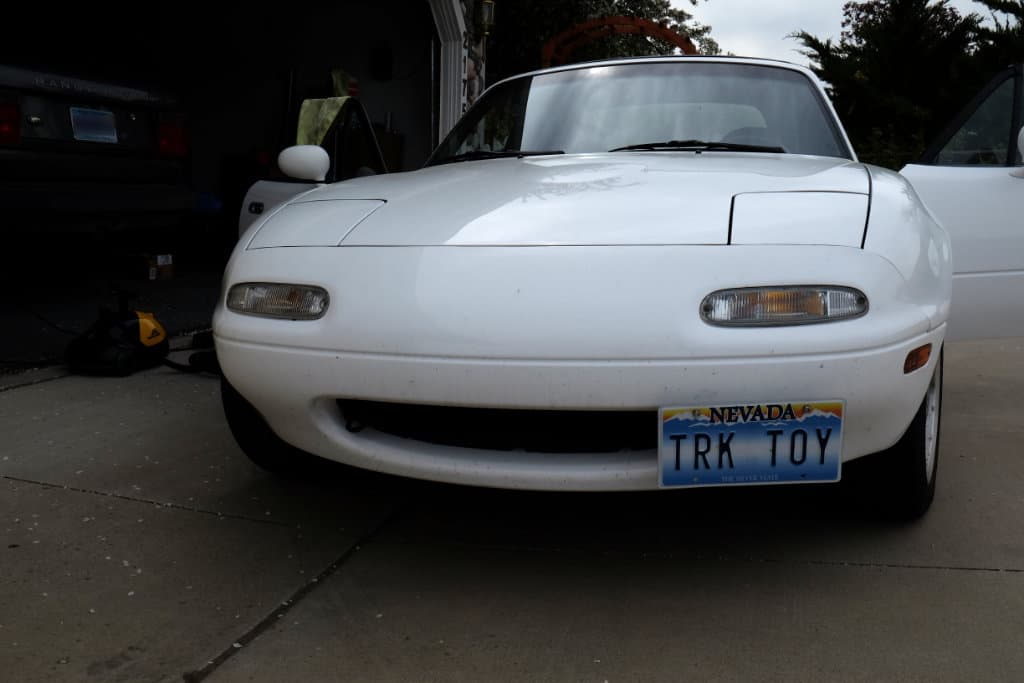 Went to the local AAA office last Monday to get the car registered. Even though our local DMV doesn’t have massive wait times, my wife had suggested I’d try AAA as it looked like there weren’t many people in line when she went there. She was right, I think I had the car registered and plated in about 20 minutes. Also gave it a wash to celebrate the occasion.

Yesterday was mostly spent in an attempt to clean up the car and further assess its condition. As mentioned, it has a bent radiator and the top plastic tank is started to discolor, so the radiator went up higher on the list than it had been before:

Definitely looks like something hit the radiator, plus it does look rather second hand anyway.

The first batch of aftermarket parts also showed up, would’ve been rude not to put them on - Garage Star front license mount and Delrin door bushes.

I can haz front plate:

The Delrin door bushings look more or less the same as the OEM ones, only that they’re not squishy. They’re also super easy to install.

Big part of the afternoon was spent with the shop vac and a newly acquired steam cleaner. The car was pretty dusty and the seats had a few stains, so I figured it was worth it trying to turn the interior into a nicer place to be.

Driver’s seat “before” - the passenger seat had already been steamed, scrubbed and vacuumed at this point:

Not sensei levels of detailing-fu, but it’s a nicer place to be right now and has less dog hair in it. The latter is kinda important - as much as I like dogs, I’m allergic to dog hair.

It also looks like the passenger side fender has been replaced, but whoever did that did a good job - it fits almost better than the original one on the driver’s side.

Next steps are pulling the wheels to have a good, hard look at the brakes and also poke around under the car. I did mention that it feels like it has an LSD, but I have no idea what’s under there. Plus there appears to be a slight oil leak from somewhere underneath there, too.

Driving it around the neighbourhood after installing the bushings does suggest it’s less rattly from the door areas, so the Delrin bushings are doing something. Driving it around again also reminded me that the gas pedal isn’t quite as positioned as I’d like it to be for heel’n’toe, so the FM pedals just went on the shopping list. I’m almost ready to order the rollbar as well, assuming that I can get a reply from a seller on Clubroadster regarding an interior “upgrade” he’s selling…

« Oops, I bought another NA Miata Parts start showing up »